Flashmob to raise awareness of abuse against women

​The event takes place at 12.30pm at Yate Shopping Centre and is part of a global campaign called ‘One Billion Rising’, which is a day of action happening around the world to help put a stop to violence against women and girls.

The spontaneous dance will be performed by council workers, members of the charity Survive and anyone at the shopping centre who would like to join in. A music track entitled ‘Break the Chain’ has been specially written for the event.

Emma Britt works at Yate Children’s Centre and is organising the shopping centre event. She said: “Domestic abuse effects one in every three women and many suffer in silence and feel alone in their pain. I hope this event will raise awareness of this campaign and the support available to women and girls locally. It is vital to raise awareness of domestic abuse and to support victims in disclosing their experiences and to seek the support they need to stop the violence and abuse.”

Anna Smith, Chief Executive of Survive, added: “Survive is proud to be involved in this creative and effective event which will raise awareness of the reality of everyday violence towards women and girls. We hope the action of One Billion Rising will inspire those who can to work towards changing the stark 1:3 statistics, reducing incidents of violence and improving services for those affected.”

Yate Children’s Centre has a base in the shopping centre and offers outreach support to families on a one-to-one basis. The service was praised in a recent Ofsted inspection for the crisis support it offers to vulnerable women. It was also recognised for its partnership working with the specialist domestic abuse charity Survive and together they offer drop in advice and information sessions fortnightly in the local area.

Emma Britt who organised the shopping centre event. said: “THANK YOU to everyone who took part and gave their support, either by dancing, taking footage, being an extra pair of hands and also turning up to watch! There were also many messages of support from people who wanted to take part but couldn’t, thank you.

If you would like to further support this cause you can watch the video and share with friends, family and colleagues. The film is only 10 minutes long, but if we share the video our message will continue a long time after and will spread far wider than South Gloucestershire.” 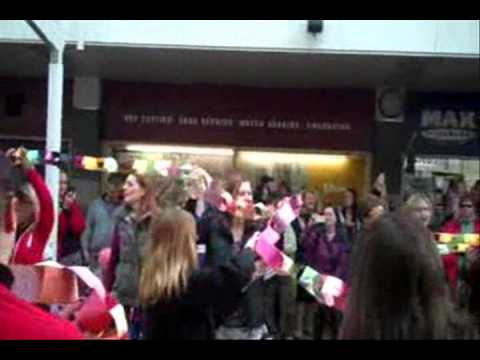